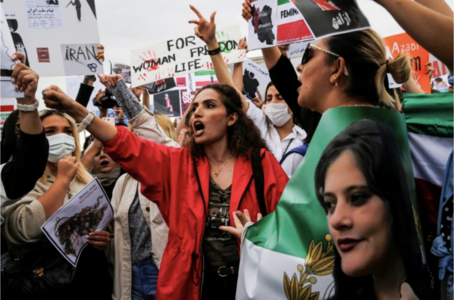 Dedicate more coverage to the historic protests in Iran—led by women, young people, and queer Iranians who are demanding freedom and bodily autonomy. The lack of mainstream media coverage aids the Iranian regime. More coverage will lift up the voices and images of what's happening in Iran, break the Iranian media blackout, and help lead to greater progress and freedom.

In Iran, women, queer folks, and primarily young Iranians are leading protests against the repressive regime—risking their safety and in some cases already losing their lives. It's an inspirational uprising for freedom and bodily autonomy that deserve global attention, solidarity and support.

However, most Americans don't even know it's happening. The Iranian authorities have imposed a media blackout. Tragically, through their lack of coverage, major U.S. media outlets are perpetuating a media blackout of their own.

If you scan newspaper headlines or track what's covered on 24 hour cables news and the network evening news shows, you'll find very little coverage of Iran—and no mentions in many outlets. When they do have a segment or interview, it often gets the story wrong—such as the New York Times emphasizing economic pressures and erasing the feminist spark at the center of this action and the protest cries for bodily autonomy and of "down with dictators." And news segments all-too-often turn to white Americans of European descent instead of voices of the Iranian diaspora or the voices that are emerging from Iran itself.

What the brave Iranians who are protesting—again, mostly women, young people, and queer Iranians—need is to have their voices, stories, and images shared again and again. The U.S. media can play an important role giving more coverage, airtime, and online prominence to these protesters and to this uprising, which will engage more Americans and help turn more global attention on to this historic series of events.