To: CNN and other national news media 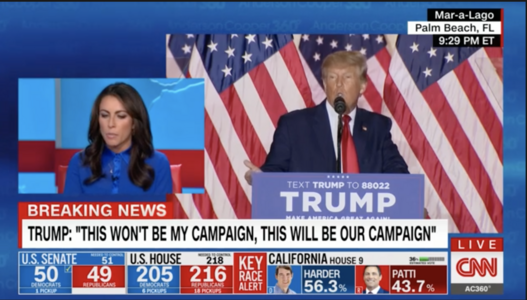 As Donald Trump announced he was running for president again. we saw that the news media learned nothing from the last go-round about how to avoid his toxic manipulations. CNN covered his speech live—essentially giving him free rein to dominate airwaves and reach viewers with his narcissistic brand of conspiracy theories and abuse.

And he doesn't have to pay a dime for all this free advertising.

In 2016, it was estimated that the major news networks gave Trump $2 billion in free airtime. [https://www.nytimes.com/2016/03/16/upshot/measuring-donald-trumps-mammoth-advantage-in-free-media.html] We can't make that mistake again.

Trump sought to overturn and election and helped incite a deadly insurrection. We know his words carry weight. You can cover him as news—but don't serve as his personal broadcasting network.

Stop covering him live. Fact-check his statements. And don't fall into the trap of giving him free airtime.