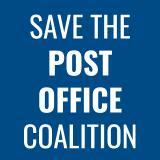 The Save the Post Office Coalition came together in the summer of 2020, when Postmaster General Louis DeJoy began sabotaging the post office with service cuts and mail slowdowns.

We are fighting to provide COVID-19 emergency relief for USPS, eliminate the artificial obstacles standing in its way, and build the post office of the future that serves everyone.