Condemn voter suppression: Our elected officials must protect our freedom to vote 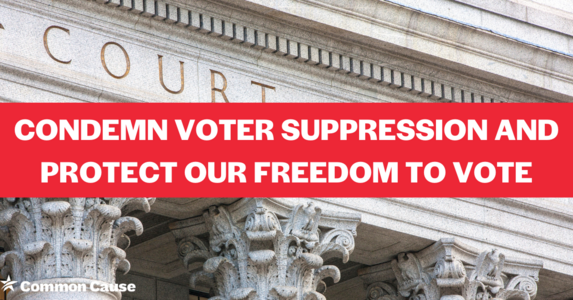 Politicians cannot abuse our courts to spread election conspiracies or roll back access to the ballot box.

Our elected officials must commit to protect our freedom to vote.

Anti-democracy extremists filed more lawsuits in 2022 than in 2020 – the year that Donald Trump dragged out his election lies in court for months.

And worst of all, almost a quarter of these lawsuits were spearheaded by elected officials – hyper-partisan Republicans trying to push an anti-democracy agenda through the courts, rather than fight legislative battles they know they can’t win.

The increasing litigation from far-right extremists means we have to expect an all-out attack on our right to vote from partisan legislators this year at every level. They’re eager to make it harder for voters to cast a ballot, especially in Black and Brown communities.

Unfortunately, some far-right extremists and failed political candidates would rather throw out legal votes to falsely cling to power than respect our democracy – and it’s up to us to stop them.

Abusing our court system to push conspiracy theories and lies about election results or vote-by-mail is no way to legislate. Sign our petition to condemn attempted voter suppression and demand our politicians protect our freedom to vote.