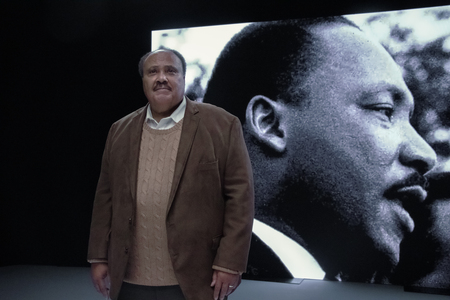 A record number of multiracial, multigenerational voters turned out to elect President Biden and Senate Democrats. Now we call on our elected leaders to protect our democracy and our fundamental rights that my father and countless others fought tirelessly to achieve. There can be no celebration on MLK day till we have voting rights.

We have seen what President Biden and Congress were able to deliver for our bridges, roads, and trains – now, they must deliver for our voting rights. Democrats must use their full power to abolish the Jim Crow filibuster and pass the Freedom to Vote Act and John Lewis Voting Rights Advancement Act.

Over 81 million turned out to vote in 2020 because we knew the stakes were high. As right-wing Republicans across the country lash out to revoke our right to vote and hold free and fair elections, we need federal action now, before it's too late.

My father, Martin Luther King Jr., knew that to bring about equality, African Americans must have the right to vote.

That’s why he marched, organized and preached every day to take his, and our steps, to the voting booth. He fought for landmark legislation, including the Voting Rights Act of 1965, and organized voter registration drives like the Freedom Summer to codify our right to have a say in the halls of powers and the laws that govern our communities and lives.

Today, after a sweeping victory for Democrats in 2020 due to the record voter turnout- led by Black, Brown, and Indigenous organizers and voters, right-wing Republicans across the country, who fear the power of Black and Brown voters, have created a wave of backlash that has been swift and brutal. Almost a year ago, a violent insurrection was mounted on our capitol, and in the months since, over 400 bills designed to limit our freedom to vote were introduced. In my home state of Georgia, the legislature has created additional pathways to interfere in local elections, including the ability to overturn results they dislike.

We’ve seen this before. Following Reconstruction, a white backlash stole voting rights from African Americans, instituted Jim Crow laws, and spawned the Ku Klux Klan. During and after the civil rights movement, white backlash led to efforts to intimidate us from exercising our rights and to suppress turnout among Black, Brown, and Indigenous voters.

As in the past, this moment calls us to lift our voices and show once again that the power lies in our hands. We have to call on our leaders to act with courage and moral conviction to defend our democracy. We are still working toward building the ideals and beloved community that my father and the civil rights movement fought for, and we cannot let racists and the right wing have their way. We have to demand that when they quote my father, or say they loved John Lewis, or celebrate his life and work, they show that love in their actions, including abolishing outdated rules in the U.S. Senate.

We should not have to march once again for the same basic voting rights my father and civil rights leaders secured in the 1960s. But as my father would have, we will continue to use our voices to call for what is right, what is just, and what is equitable. It is long past time that we stop bending to the filibuster as it enables dangerous obstruction to persist. Together, we demand that Democrats abolish the filibuster and pass the Freedom to Vote Act and the John Lewis Voting Rights Advancement Act now.