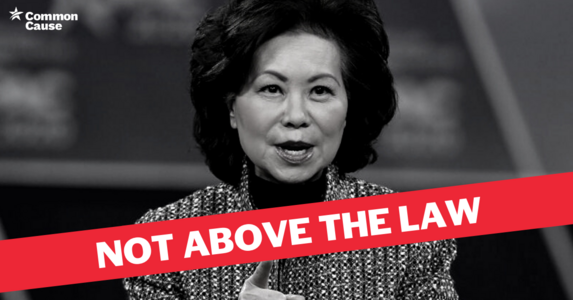 Former Transportation Secretary Elaine Chao repeatedly abused her position to help her family and promote their shipping company, according to the department’s inspector general. But Trump’s Department of Justice decided to ignore these serious allegations.

President Biden’s Justice Department must rectify this failure to uphold the rule of law -- by investigating Chao and holding her accountable. Plus, we call on the Senate to pass the For the People Act (S. 1) and enact strict ethics requirements for appointed and elected leaders

President Trump’s Justice Department chose to look the other way as yet another Trump appointee abused her public office for private gain, according to new reports.

Former Transportation Secretary Elaine Chao has been accused by the department’s inspector general of repeatedly using her position to help her family and their shipping business, Foremost Group.

The inspector general’s 44-page report detailed dozens of these instances. To name just a few -- she used Transportation Department resources to arrange a trip to China for her father and sister; she tasked staff with promoting her father’s public appearances; and she even had her employees perform chores for her father, like updating his Wikipedia page. [1]

Plus, according to the report -- Sec. Chao did an interview with a Chinese-language television station just to help boost her father’s profile and promote Foremost Group.

The inspector general referred these serious allegations of nepotism to Trump’s Department of Justice for a possible criminal investigation -- but in the last few weeks of the administration, the department declined to take action.

That’s outrageous -- it’s clear that the Trump administration was rife with corruption. We’re calling on Biden’s Department of Justice to take up this investigation and hold Sec. Chao accountable.

Plus, the Senate must pass the For the People Act (S. 1), a bill that was recently passed in the House that includes strict ethics requirements for appointed and elected leaders. We can’t let the Senate -- and especially Sec. Chao’s husband, Minority Leader Mitch McConnell -- shut down this important legislation.