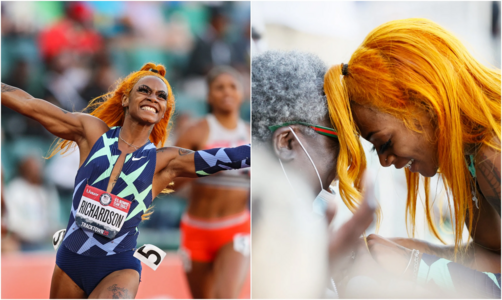 Reinstate Sha'Carri Richardson and allow this world-class athlete to compete in the 100-meter dash! And revisit the outdated rules around marijuana and athletes.

Sha’Carri Richardson is one of the fastest athletes in the world—and would have a real chance of winning the 100-meter sprint in the Summer Olympics this month.

However, due to an outdated and arbitrarily enforced rule around marijuana, she's now going to be kept from competing on the world stage.

In no world is marijuana a performance-enhancing drug for runners, and in more places in the United States and around the world, marijuana use is legal. The United States Anti-Doping Agency should drop their penalty and allow Richardson to compete!

There are many reasons to have rules against performance-enhancing drugs, but this one is absurd.

The imposition of a penalty against a world-class Black, queer, woman athlete is powerfully and infuriatingly reminiscent of the way drug laws are regularly applied in the United States. Recreational marijuana use has been de facto legal for upper-middle-class white people for years—something more states are recognizing as they legalize marijuana for all people and consider how to repair the damage done to Black and brown communities by decades of the "war on drugs."

The world is coming together for a Summer Olympics postponed by a global pandemic, and we deserve to see the best athletes in fair, open competition. That includes Sha'Carri Richardson, whose one-month penalty is excessively punitive for an irrational, outdated rule.