Trump Should Be Arrested and Prosecuted for Inciting an Insurrection 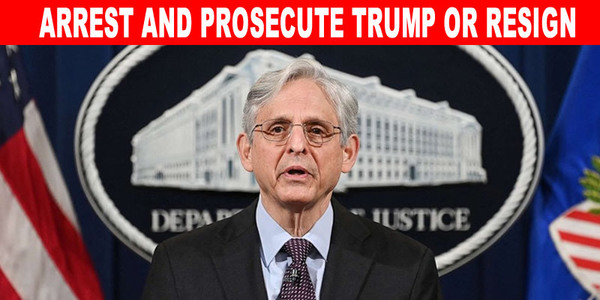 The Mueller Report which was released in April of 2019 established that Trump Obstructed Justice on at least 10 occasions. Within one month of taking office, the Merrick Garland DOJ should have filed charges against Trump for Obstruction of Justice and arrested him for those offenses.

Nixon's Attorney General John Mitchell was Arrested & Convicted for the very same offense of Obstruction of Justice in 1977 and served 19 months in Prison. There's no excuse for Merrick Garland's DOJ failing to hold Trump accountable as well.

Garland’s Justice Department failed to reverse one of the most egregious abuses of the William Barr DOJ ... the legal defense of Trump in the defamation suit filed by magazine columnist E. Jean Carroll. Also refusing to release the FULL unredacted Mueller Report to the public detailing Trump’s Obstruction of Justice is an outrage, because tax payers paid for it and has a right to see it. We're supposed to have a government which is "Of the people, for the people and by the people".

(1) Obstructing justice as identified in the Mueller investigation.
(2) Bribing and/or extorting Ukraine with military aid to investigate his political opponent Joe Biden and conduct another investigation undermining the Mueller investigation.
(3) Coercing cabinet members and other federal employees to engage in partisan political activity in violation of the criminal political coercion provisions of the Hatch Act.
(4) Soliciting election fraud in a phone call to the Georgia Secretary of State in November 2020.
(5) Criminal sedition in authorizing preparation of the unsigned draft Executive Order dated December 16, 2020 pursuant to which President Trump would have ordered the Secretary of Defense to seize voting machines in certain states to look for evidence of election fraud.
(6) Inciting insurrection at the Capitol on January 6, 2021.

These alleged politically-related crimes are over and above the financial crimes being investigated by the Manhattan DA, who has already indicted the Trump Organization and its chief financial officer.

In addition to the above crimes, numerous sources recently revealed that Trump destroyed & removed top secret documents from the White House, violating the Presidential Records Act.

Former Federal Prosecutor Glenn Kirschner stated that Failure to Prosecute could be a CRIME in itself... a violation of 18 U.S. Code § 3 "Accessory after the fact".

"Whoever, knowing that an offense against the United States has been committed, receives, relieves, comforts or assists the offender in order to hinder or prevent his apprehension, trial or punishment, is an accessory after the fact".

Failing to Arrest and Prosecute Trump for his numerous crimes is giving him preferential treatment and proving there's Two (2) Justice Systems in the United States; one where the RICH and POWERFUL are above the law, and another for everyone else.

The American people DEMANDS JUSTICE and ACCOUNTABILITY for Trump - NOW.

Mr. Garland, do your job and Arrest / Prosecute Trump for his numerous crimes immediately or RESIGN.

Failing to Arrest and Prosecute Trump for his numerous crimes is proving there's Two (2) Justice Systems in the United States; one where the RICH and Politicians are above the Law, and another Justice System for everyone else.

The American people DEMANDS JUSTICE and ACCOUNTABILITY for Trump - NOW.