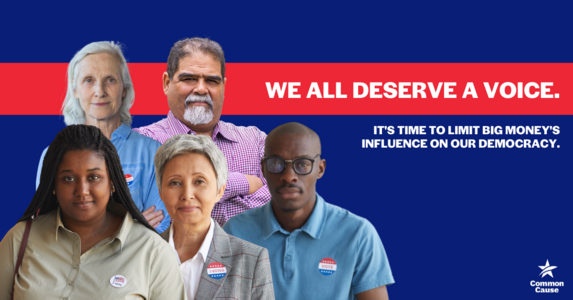 NO ONE should have an outsized say in our democracy due to the size of their wallet -- and political spending should be transparent.

That is why I'm calling on Congress to pass the DISCLOSE Act -- and also to overturn the Supreme Court’s disastrous Citizens United decision -- to fight back against this country's Big Money problem.

Mega-donor Barre Seid’s $1.6 billion contribution is likely the largest EVER made in politics. The fact that a single billionaire can buy such outsized political power just goes to show how dangerous the Supreme Court’s 2010 Citizens United ruling really was.

How? This decision opened the Big Money floodgates, allowing groups like Leo’s to more directly influence our elections while still taking in unlimited cash from powerful mega-donors – often in secret.

That is NOT how our democracy is supposed to work. We the People should call the shots when it comes to the issues that impact our everyday lives – not a shadowy network of wealthy special interests.

And passing the DISCLOSE Act would be another huge step towards transparency and accountability – by modernizing disclosure laws and ending political loopholes that give corporations and special interest groups the ability to hide their campaign-related spending.

But frankly, if we want our representatives to respond to this growing Big Money crisis – we need to speak out now.

Congress should pass the DISCLOSE Act – and also work to overturn Citizens United – immediately, because everyone has a right to know who is trying to influence our elections.