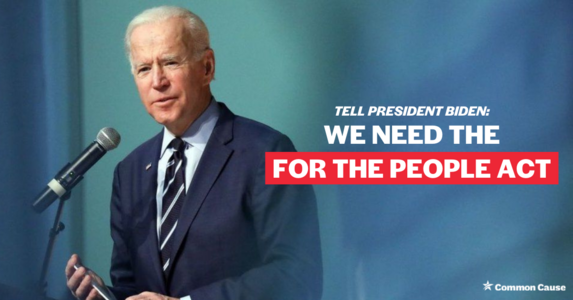 President Biden has vowed again and again to defend the freedom to vote against targeted attacks from GOP officials. But his words are just a start -- now, he needs to follow them with action and do everything he possibly can to pass the Freedom to Vote Act.

We’re running out of time. We call on President Biden to use the full power of his office -- including appealing to senators, calling for an end to the filibuster, and ramping up the use of his bully pulpit -- to ensure the Senate responds to the voting rights crisis before it’s too late.

Earlier this summer, President Biden told a crowd in Oklahoma that he was going to “fight like heck” to ensure that Congress protects our voting rights and democracy.

But weeks later, he’s still leaving multiple options on the table -- letting Mitch McConnell’s filibuster get in the way of this once-in-a-generation legislation.

In that time, several states have moved new laws that would make it harder for voters, especially Black and Brown voters, to cast their ballot. And if we don’t act soon, anti-democracy forces -- like Big Money special interests and gerrymandering politicians -- will have free reign to manipulate the 2022 elections to their advantage.

Our democracy can’t wait -- and we can’t risk our future in futile hopes that Mitch McConnell will come to the negotiating table. We urgently need President Biden to keep his promise by doing everything in his power to get the Freedom to Vote Act over the finish line.

The For the People Act includes proven, comprehensive provisions that would protect the freedom to vote, end partisan gerrymandering, limit Big Money’s stranglehold on our democracy, hold elected officials to a higher ethical standard, and so much more.

Restoring our democracy is far too important a job to let Mitch McConnell veto it with a Senate minority. McConnell and Senate Republicans already filibustered debate on the For the People Act -- and we can’t let them do it again on this new bill.

If we want to see this historic bill passed this summer, Biden needs to get bold -- and fast. He must publicly urge the Senate to abolish the filibuster, wield the power of the bully pulpit, and appeal directly to senators like Joe Manchin, who we’ll need to break McConnell’s stranglehold on the Senate.

If Biden doesn’t take bold action right now, he’ll be handing control of many of his top priorities and his legacy over to Mitch McConnell. Add your name and urge President Biden to do whatever it takes to pass the Freedom to Vote Act.