President Joe Biden: call for a ceasefire & an end to forced evictions of Palestinians 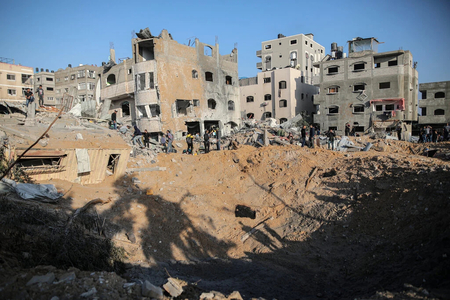 President Biden must take urgent action to de-escalate the situation in Palestine and Israel, and secure an immediate ceasefire. In the past week, graphic videos and images of the violence engulfing Israel and Palestine have circulated around the world, capturing international attention as the threat of increased military action looms. The violence has already led to dozens of deaths, including children.

Many more are likely to die if the situation does not de-escalate immediately. Military action will never bring about a just and peaceful resolution between Israelis and Palestinians. President Biden must take action to immediately de-escalate the situation and broker a ceasefire.

President Biden campaigned on advancing human rights and a diplomacy-first foreign policy to restore America’s leadership around the world. In addition to brokering a ceasefire, the Biden administration must address the root causes of this decades-long crisis including calling on the Israeli government to put an immediate stop to the forced evictions and displacement of Palestinian families in order to achieve a just solution grounded in human dignity.

Devastating videos of Israeli forces attacking Muslim Palestinians praying in Al-Aqsa Mosque during the holy month of Ramadan began to proliferate on social media late last week. In one such video, Palestinian women in the mosque are seen screaming and running from stun grenades fired by Israeli soldiers. This is in one of the holiest places of worship in one of the holiest months for Muslims around the world. Israeli forces injured hundreds of Palestinians, including medics treating injuries nearby, and the Israeli government has used airstrikes, rockets, and rubberized steel bullets to inflict violence against any resistance from the Palestinians.

These troubling videos followed the decision of the Israeli government to forcibly evict families from the Palestinian neighborhood of Sheikh Jarrah in East Jerusalem. Although the Israeli Supreme Court stepped in to pause the evictions, this is part of a larger decades-long pattern of forced evictions, home demolitions, and displacement of Palestinians.

The violence that started in Jerusalem has continued and spread, leading to massive unrest in the region and the worst escalation of violence in seven years between Israel and Palestine. Potential increased military action will only exacerbate the current situation with daily air strikes by the Israeli military in Gaza, Hamas launching over a thousand rockets to Southern and Central Israel, and growing violence on the streets already plaguing communities across the region.

Morally courageous American leaders, including a slew of members of Congress, have already come out in support of the Palestinian people and called for an immediate ceasefire and an end to the Israeli policies of occupation and displacement of Palestinian families.

The Biden administration must immediately do the same by leveraging its longstanding relationship with the Israeli government to call for an immediate ceasefire. In contrast, Biden and top cabinet officials seemingly offered support to the Israeli government to continue its policies precipitating the current crisis. In a call with Israeli Prime Minister Benjamin Netanyahu, Biden offered “unwavering support” for Israel’s “right to defend itself,” and made no mention of Netanyahu’s responsibility in inflaming and perpetuating violence as a political ploy to distract from his own diminishing power to govern. The United States even blocked the UN Security Council’s attempts to reduce tensions between Israel and Palestinians.

With nearly $4 billion a year in U.S. military aid to Israel, the Biden administration has a responsibility to hold the Israeli government accountable. Before more violence ensues, the U.S. government must denounce the recent violence and call on the Israeli government to stop forced evictions, mass arrests, and other policies meant to harm and escalate tensions. We urge the Biden administration to forcefully advocate for an immediate ceasefire before many more civilians -- who will disproportionately be Palestinian --lose their lives.