REJECT and RESCIND any calls for an Article V Convention 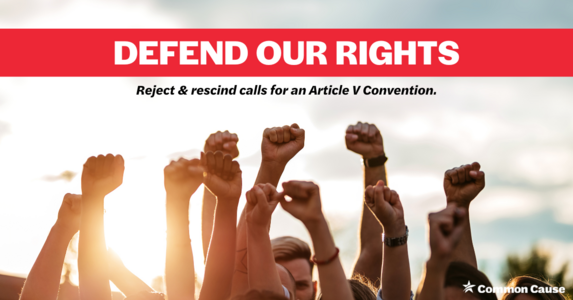 We the People will not allow unelected, unaccountable delegates to write their agenda into our Constitution. Our state lawmakers must stand firm - and reject and rescind calls for an Article V Convention.

Donald Trump wants to TERMINATE the Constitution – because he’s finally realized that it’s standing in the way of his desperate attempts to overturn the 2020 election over two years after the fact.

And while it might sound ridiculous, far-right mega donors and Trump cronies like Steve Bannon are working behind the scenes to do exactly that.

Under Article V of the U.S. Constitution, Congress is required to hold a constitutional convention if two-thirds of state legislatures call for one. And right now, we’re just a handful of states away.

Exploiting never-before used provisions of Article V of our Constitution, 28 states have signed on to allow unelected, unaccountable delegates to rewrite the Constitution with zero checks and balances. No convention has ever been called under Article V for a reason: there is just too much at stake.

Far-right groups like the American Legislative Exchange Council (ALEC) are trying to get this done behind closed doors and out of the public eye. But Common Cause is shining a spotlight on their sinister efforts in state after state – and so far, we have successfully rolled back calls for an Article V Convention in Colorado, New Hampshire, Delaware, and others.

We need your help now to protect our Constitution once and for all. Add your name to oppose a dangerous, unregulated convention of states.

To learn more about the dangers of an Article V Convention, visit defendourconstitution.org.