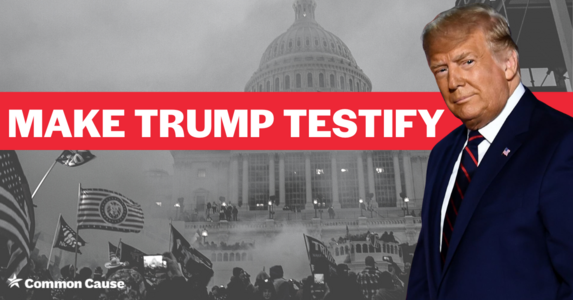 Donald Trump is not above the law. He must testify in front of the January 6th House Committee and provide all requested documents – and if he refuses to comply with the Committee's subpoena, the House must vote to hold him accountable.

Donald Trump just SUED the January 6th House Committee, his latest attempt to dodge testimony and hide the truth about his role in the deadly attack on our Capitol.

Since the onset of this crucial investigation, Trump has done nothing but try to obstruct and discredit the Committee. He has clearly put himself high above the law – and thinks he shouldn’t be held accountable for his criminal efforts to overturn the 2020 election.

If he is as innocent as he says he is, testifying shouldn’t pose any problem – Trump should welcome the opportunity to exonerate himself. But all he’s done since being subpoenaed is double down on his 2020 election lies and conspiracies – and his refusal to face the Committee speaks volumes. Seven former Presidents have testified before Congress, so there is clear precedent for Trump to testify.

Congress must show Trump once and for all that ignoring this subpoena is not an option. We the People deserve nothing less.

Add your name if you agree: Donald Trump is not above the law – and the House must vote to hold him accountable if he doesn’t fully comply.