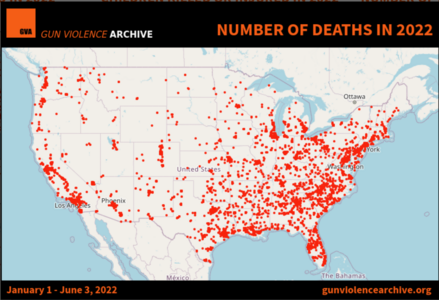 We need decisive leadership to end gun violence. Please start by signing an Executive Order renewing the Federal Assault Weapons Ban and increasing gun regulation. We need you to make a bold move to show the Legislative Branch that you mean business. We cannot wait on them any longer. Gun violence will not end without showing the NRA and all of the politicians who they control that we will not tolerate the sale of these military grade guns to our civilians. New Zealand did it, so can we. Please act now before more lives are lost.

According to the GVA, the Gun Violence Archive, there have been 213 mass shootings in 2022 thus far. In 2021 there were 692, and in 2020: 610. The US gun industry is making record profits while there are record numbers of mass shootings every year. Their sales of these assault weapons is literally supporting domestic terrorism. Blood is on their hands and they must be stopped and held accountable. Our country is living with the terror of gun violence daily; the gun manufacturers have been better protected than our children! This must stop now.

Clearly, our legislators are unable to come to any meaningful agreement over gun control. The Republicans continue to obstruct legislation.

June 6, 2022: (CNN) "As Congress considers, again, the possibility of moving a package of gun control reforms, a number from a new CBS News/YouGov poll jumped out at ... as evidence of why solving America's gun violence problem is so hard.

It's this: 44% of Republicans said that mass shootings are something we have to accept as part of a free society. (A majority of Republicans -- 56% -- said mass shootings are something we can prevent and stop if we really tried.)
That number is a striking departure from how the country as a whole views the issue. More than 7 in 10 Americans (72%) said that mass shootings could be prevented if we really tried, while just 28% said they were part of living in a free society."
This is why the President has to take this in his own hands and sign an executive order to ban assault weapons - as a start.

President Biden spoke to the nation on 6/2/22 calling for bold, decisive action from the legislative body but we know they are deadlocked because most of the Republicans and some Democrats are beholden to the gun industry and a false notion of the Second Amendment.
According to the Gun Violence Archive and reported by the AP, there have been 20 mass shootings since the one in Uvalde, TX!
https://www.gunviolencearchive.org/reports/mass-shooting
Let's send a clear message to our president that he can do what Ardern and Trudeau have done, and lead our nation by taking action himself. There can be no more waiting.