To: US House, US Senate, Cabinet members 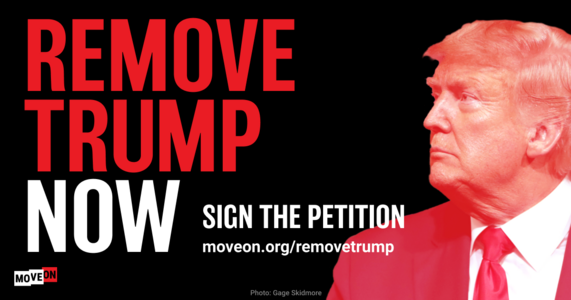 Donald Trump must be impeached or otherwise removed immediately and barred from holding office. The daily damage he is doing to America—much of it criminal—is inexcusable. He continues to relentlessly spread conspiracy theories about voting and federal elections and is actively working to manipulate election results. Trump's incitement of mob violence earlier today in D.C. is just the latest in a series of insults and assaults on our democracy.

Most Americans don't approve of Trump's presidency, a record number just voted him out of office, and many Republicans are now also willing to admit Trump is a drag on their party and the nation. As a result Trump is furious and even more of a threat to America than ever before. Whether by impeachment or the 25th amendment, Trump must be removed—and ultimately held accountable for the attacks on our elections, incitement of violence and so much more.

His selfish obsession with power means he is burning down everything in his path and picking public fights with everyone —he continues to attack Democratic leaders, journalists, nonpartisan election officials, and now he's even turned on Mike Pence and Mitch McConnell.

Our nation's federal leadership must come together to remove Donald Trump from office. He is actively and illegally working to overturn the results of the election because he cannot stand to admit he lost. He's the leader of the violence and chaos at the Capitol right now. Enough is enough. Remove Trump from office. Now.