Infants are dying before our very eyes- Do you see – Do you Care? 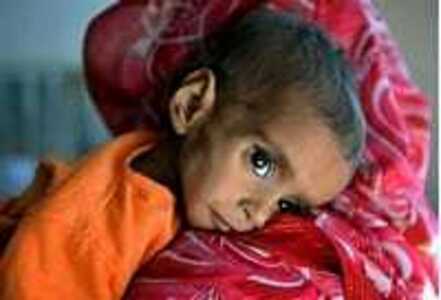 If you agree that it is morally unacceptable for the U.S., and the International Monetary Fund to politicize food meant for innocent Afghans, including starving infants, please sign the petition: President Biden, unfreeze more than nine millions of dollars - “... in such a way that they go directly to organizations like United Nations World Food Program, Doctors Without Borders.”

Yesterday, 11/8, on the PBS Evening Newshour, we saw in Kabul's main children's hospital, 2½-year-old Guldana sitting up in her bed, too exhausted to even open her eyes. Her tiny body wrapped in a blanket, only her emaciated face showing. She is, probably was by the time you read this, just one of many infants in Afghanistan's hospitals, laying, two to four to a bed, starving to death, while helpless mothers watch them die.
T he United Nations World Food Program (WFP) has warned that 22.8 million Afghans - that is more than half the country's population - now face hunger – including starvation.
On Yesterday's NewsHour the WFP's Executive Director, David Beasley, reported that such suffering is occurring not just because Afghanistan has suffered severe drought for the last four years, but because “more than $9 million of the country's foreign assets have been frozen by the U.S. Government to prevent the Taliban from accessing them.... This is morally wrong, he said. “Don't politicize food....All I am ...saying, is please you must understand that people are dying. More people are going to die. If you don't unfreeze those funds — unfreeze them in such a way they go directly to the people through organizations like us. The Taliban have told us: We will stay out of your way. We will support anything you need to reach the people you need to reach.” PBS NewsHour, 11/8/21
Please sign the petition . And of course, you may go to the WFP and Doctors Without Borders' websites to support their incredible work to alleviate human suffering. …

I have gotten 66 signatures as of today, so only need 34 more for Move On to place my
petitiion on live. Justice and compassion demand we not turn our back on starving individuals, including infants, in part caused by our government's freezing of millions of Afghanistan's assets.