It’s not enough to hit pause on human rights violations 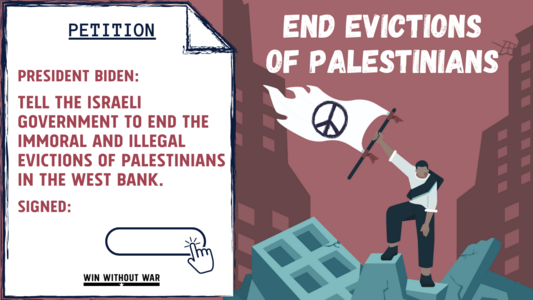 I urge you to use your power to end the Israeli government’s human rights abuse. Your administration has already asked Israel to avoid exacerbating tensions ahead of your visit to the Middle East — now we’re asking you to urge the Isreli Government to halt demolitions in Masafer Yatta for good.

It’s not enough to hit pause on human rights violations

Did you know the Biden administration has asked Israel to pause “actions in the occupied West Bank and Jerusalem that could create tensions” ahead of the president’s visit to the region this week? That means they’ll play “nice” while the diplomats meet, but once the president is gone, it’s back to business as usual: occupation, evictions, bulldozers, and violence.

Take Masafer Yatta — just weeks before President Biden’s first official visit to the Middle East, Israel began the largest forced eviction in the West Bank in DECADES. At least 1,000 Palestinians living in the villages of Masafer Yatta are facing eviction as the Israeli government continues its strategy of illegal encroachment in the West Bank.

It’s not enough for the Israeli government to simply pause their human rights violations, and we can help put a stop to them once and for all. Usually, this kind of aggression by Israel’s government would be overlooked by the United States. But with President Biden touching down in the region today, and members of Congress already speaking out, we have a unique opportunity to push for more and to STOP the evictions and demolitions before it’s too late.