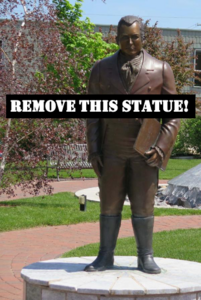 We call on the City of Edwardsville to remove the statue of Ninian Edwards from City Plaza.

Ninian Edwards was a founding political leader and governor of Illinois in the 1800s. He was also a slave owner who actively encouraged the continuation of slavery in Illinois when the North West Ordinance of Illinois outlawed it. Edwards also participated and encouraged the removal and genocide of Native Americans in Illinois. In 2007, a statue of Edwards was erected and a plaza was named after him, right in downtown Edwardsville.

Our downtown public spaces should celebrate our community's values and identity. The statue and plaza perpetuate negative messages about who is and is not welcome in our city, about who we revere and who we value. On November 17, 2020, the city took a first step by renaming the plaza. Edwardsville should demonstrate its commitment to equality and its opposition to racism by taking the next straightforward action - removing the statue.

We believe this is the right action because of our history. We must learn about Edwards - who he was and what we did - but we should be doing so in a way that is appropriate for learning history, rather than revering him in the heart of our city. The statue can be rehomed to an educational/historical setting.

Zoom Panel on monuments and racial justice
9/24 at 7pm

SIUE is part of the international Universities Studying Slavery (USS) Consortium, an initiatiive that is part of SIUE’s role as a Truth, Racial Healing, and Transformation (THRT) Center. As part of the Sankofa Lecture Series, the USS is hosting a panel discussion on September 24 at 7pm via Zoom on monuments in the age of Black Lives Matter, with a focus on St. Louis and the Metro East. SIUE historians Dr. Katie Poole-Jones, Dr. Erik Alexander, and Dr. Jeff Manuel will be discussing public monuments and their meanings in today's world. I will update this with more information soon once I have it. We are going to partner with USS for an educational form on the Ninian Edwards statue to be held in November/December.