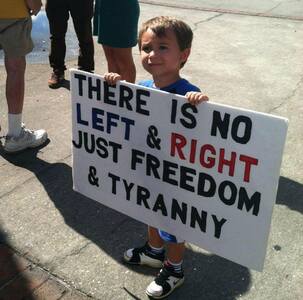 Democracy is an illegitimate form of government. America is a Constitutional REPUBLIC! That would make us all Republicans! A Republic is self ruling by the rule of Law. Democracy is a falsehood, we can no longer afford to believe we are a majority rule. We the people can eliminate the divisiveness in politics, pitting one opponent against another as the people are being raped, fleeced of our wealth and or our liberty by our corrupt solded-out government. The Left and Right are both equally complicit but with only one Union, not two parties, playing out their false differences we can all rule out and see their lies, deception and treasonous acts clearly

The word democracy does not appear in The Constitution nor does it appear in The Declaration of independence. America is NOT nor was it ever intended to be a Democracy. We cannot spread Democracy by war all over the world if we are not a Democracy! All too often in our political system we fight with left and right, it's time we all stand in unity as a Republic, the way our forefathers intended...one nation under God

Deliver by email, post everywhere to all the American via press conference whatever it takes!