To: Secretaries of State, state election officials, and members of congress 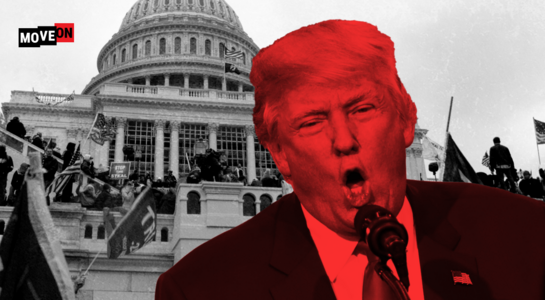 The Constitution’s 14th Amendment provides for the disqualification from office of any person who has “engaged in insurrection or rebellion against” the United States. That includes Donald Trump. As a result, he does not meet the qualifications to become president again.

Election officials in every state must respect the Constitution and reject Trump from their ballots. And Congress can help clarify that by passing legislation to bar Trump from office under the Fourteenth amendment.

Donald Trump and his associates planned, promoted, and paid for a criminal conspiracy that became the January 6 insurrection.

According to the U.S. Constitution, that disqualifies him from ever holding office again. Section three of the Fourteenth Amendment, the “insurrection clause,” makes clear that anyone who engaged in attempting to violently overthrow the US government after swearing an oath to protect it is barred from being given that responsibility again.

We need to fight back even harder to hold Trump accountable for his actions to damage our democracy—actions that continue today and are focused on laying the groundwork for his next coup to place him in the White House in 2024 no matter the will of the voters. State elections officials already have the authority and responsibility to bar him from the ballot. And Congress can back them up by passing legislation barring Trump from office under the Fourteenth amendment.

Will you sign the petition today to join the fight to disqualify Trump from holding public office and help disrupt plans by Trump and his allies for his next coup in 2024?

2. “How the 14th Amendment Could Disqualify Trump and His Allies,“ Democracy Docket, June 6, 2022
https://www.democracydocket.com/analysis/how-the-14th-amendment-could-disqualify-trump-and-his-allies/