To: Brian Cornell, Board Chairman and CEO of Target Corp. 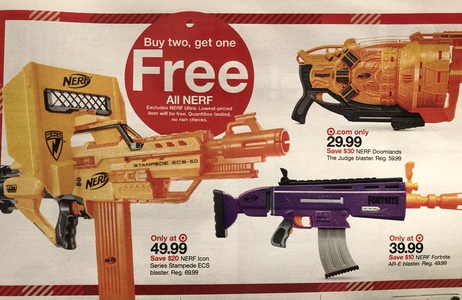 Target’s weekly ad on the Sunday after Thanksgiving featured a Nerf gun called a “Fortnite AR-E blaster.”(1) This toy gun looks like an AR-15, the weapon of choice for mass shootings—including the school shootings at Margery Stoneman Douglas HS in Parkland, FL and Sandy Hook Elementary in Newtown, CT. In these times of horrific gun violence, family-friendly Target should not be selling toys modeled on AR-15s or other assault-style weapons.

The US now has mass shootings on a near-daily basis. Children routinely participate in active shooting drills at schools due to the threat of gun violence. Many have seen news reports from shootings, including images of children crying outside their schools while police address the aftermath of a school shooting. Some have been directly affected by gun violence. Imagine those children seeing toy guns at Target that look like the assault-style weapons that are regularly used in mass shootings, packaged in boxes with pictures of smiling children holding the guns. What kind of message does it send to children who fear or have suffered from gun violence to see these “toys” for sale?

Imagine a child who comes across a real gun at home or while visiting a friend or relative, which happens with alarming frequency. (2) Will that child who has seen toy guns at Target think the gun is a toy, perhaps leading to an accidental shooting?

Imagine a troubled teen who has considered using a gun to injure himself or others? Will seeing the toy guns at Target encourage him or make him think that a real gun is not harmful?

Imagine a child playing with one of these toy guns in the yard or a park. Might the police or someone else mistake it for a real gun (especially if the orange tip has been removed) and shoot the child? (3)

There may have been a time when most people didn’t think twice about toy guns. But now that mass shootings and school shootings have become routine, no responsible retailer should sell "toys" that look like the deadly assault-style weapons used in those shootings. Guns are not toys.

Target holds itself out as a responsible corporation that helps communities. The Target website proclaims: “We’re putting the needs of people, communities and the planet at the heart of how we work today, to help build a better tomorrow.”(4) Target also says it wants “to help all families discover the joy of everyday life.”(5) Selling toy guns that look like assault weapons does not help communities or families; it hurts them.

2. A recent study estimated that 4.6 million children live in a home with a gun that is loaded and unlocked. Deborah Azrael, et al., “Firearm Storage in Gun-owning Households with Children: Results of a 2015 National Survey.” Journal of Urban Health (2018) 1-10. Approximately 40% of gun owners report that there is always a loaded gun within easy reach when they’re at home. Kim Parker, et al., “America’s Complex Relationship with Guns,” Pew Research Center (June 22, 2017) 9, http://assets.pewresearch.org/wp-content/uploads/sites/3/2017/06/06151541/Guns-Report-FOR-WEBSITE-PDF-6-21.pdf.