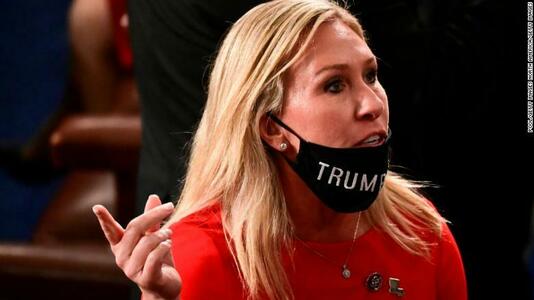 There is no place in Congress for Rep. Marjorie Taylor Greene, who most recently argued that the January 6 insurrection would have been armed and succeeded under her leadership. She has previously made an abhorrent comments comparing the mask mandate in the U.S House to the Nazi extermination program of Jewish people during the Holocaust. There is no place in Congress for her racism, Islamophobia, antisemitism, conspiracy theories, and attacks against survivors of gun violence. There is no place in any workplace, much less the halls of Congress, for those who harass, intimidate, and spew hate at their colleagues.

Kevin McCarthy and the GOP's silence in the face of Greene's unconscionable conduct isn't just a bad look—it's a threat to other lawmakers. Her recent comments glorifying the violent attack on our country on January 6, 2021, suggesting that she would have overthrown the government with armed insurrection, is inexcusable. Her previous threats against Rep. Alexandria Ocasio-Cortez have caused AOC to fear for her physical safety and hire more security, and Rep. Jimmy Gomez, who introduced the resolution to expel Greene, reports receiving death threats from her supporters.

Republican House Minority Leader Kevin McCarthy is failing in his duty to reprimand Greene for her heinous words and deeds. He was forced to remove her GOP committee assignments, but following the 2022 election, he's making deals with her and seems prepared to reward her bad behavior in order to consolidate his own power. Meanwhile, McCarthy ousted Rep. Liz Cheney from House GOP leadership for telling the truth and calling out Trump’s big lie that the election was stolen. This proves that Marjorie Taylor Greene is not an outlier in the Republican party. She is a perfect encapsulation of today’s GOP.

Workplace safety is a growing concern across America. Hate can be lethal. There should be no tolerance for anyone who threatens colleagues. This goes for Congress as well – if not more so since members of Congress are supposed to be national leaders.

The list of reasons why Rep. Greene should be expelled from Congress goes on and on, but here are a few:

- She has repeatedly publicly supported calls to execute prominent Democratic politicians, including liking a Facebook comment that called for Nancy Pelosi to get "a bullet to the head." In other posts, Greene liked comments about executing FBI agents who were alleged to be part of the "deep state" working against Trump.

- She’s endorsed conspiracy theories claiming that 9/11 was an inside job and that the Sandy Hook shooting--where 26 elementary school children and teachers were massacred—was staged.

- She is Islamophobic and antisemitic and suggested the 2018 midterms—when our nation’s first two Muslim Congresswomen were elected—were part of “an Islamic invasion of our government,” and she thinks Jewish space lasers are responsible for a wildfire in California.

- She was one of the many members of Congress who voted to object to the election results after the deadly, white supremacist attack on our Capitol and our democracy on January 6.

- On January 12, after the insurrection and after results of the election had been certified by all 50 states, by the Electoral College, and by Congress, she tweeted, “President Trump will remain in office.”

- She has repeatedly targeted, threatened, and harassed other members of Congress including Congresswomen Cori Bush and Alexandria Ocasio-Cortez.

- Hundreds of posts, likes, and comments showing Rep. Greene inciting violence by spewing baseless conspiracy theories that have endangered the lives of many continue to resurface across the internet.

And that’s just scratching the surface. Our country and democracy are in danger every minute that Rep. Greene is still a member of Congress. McCarthy can change this. This is why we must come together to make sure McCarthy expels Marjorie Taylor Greene from Congress, now.