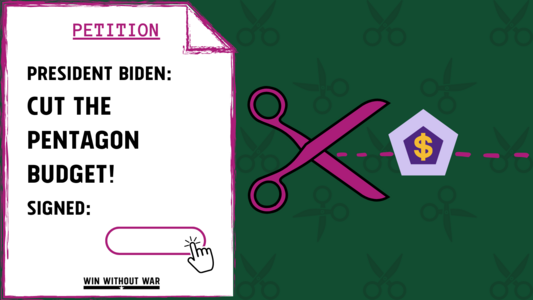 Spending to support weapons and war has steadily increased every year, recently culminating in an authorization for a $778 billion Pentagon budget in Fiscal Year 2022.

Military spending now represents more than half of all federal discretionary spending, despite the fact that the Pentagon can do little to fight existential threats facing our nation including pandemics, systemic inequality, and climate change.

It’s time to build a budget that works for the people, not defense contractors and war-hawks. I urge you to cut Pentagon spending in your budget request.

It’s the LARGEST war budget in recent history. And if you’re outraged at the disconnect between what our communities need and what Congress and the White House sign off to spend, you’re not alone.

But here’s the thing: the start to stopping another colossal waste on our watch happens NOW. President Biden’s team is already putting their FY2023 budget request together.

That means we need to make sure the White House hears from us — and that we’re loud enough to drown out the weapons lobby, who you better believe are gearing up to get loud too.

Sign now to tell President Biden to build a budget that works for the PEOPLE, not defense contractors and war-hawks.