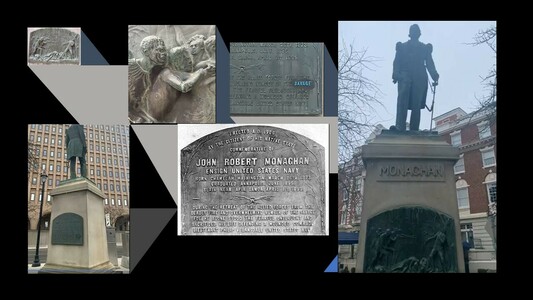 We would like to begin by thanking the City Council and the Plan Commission for the important work done last fall to re-name Ft. George Wright Drive to Whistalks Way. While some argue such changes are merely symbolic and lack impact, the decision to cease commemorating a historical figure responsible for genocide is a significant step in healing for those communities who still, generations later, have been affected by the aftermath of their brutality.

It is in this same vein that we, the undersigned individuals, urge you to remove another Spokane monument that continues to perpetuate racism and inflict pain upon members of our community: the John R. Monaghan statue.

At first glance, the statue, which belongs to the city and is located opposite the Spokane Club, appears as nothing other than a prominent memorial to a fallen war hero. “During the retreat of the allied forces from the deadly fire and overwhelming number of the savage foe,” the inscription reads, “[Ensign John R. Monaghan] stood the fearful onslaught and sacrificed his life defending a wounded comrade Lieutenant Philip V. Lansdale United States Navy.” Although most who pass by the statue are unlikely to know who Monaghan was, or what battle he fought in, it is known around the world to the Pacific Islander community as a devastating reminder of the thousands of innocent men, women, and children whom were brutally murdered. It stands as a monument to the unprovoked, antagonistic, colonial attacks by the United States on Sāmoa and Sāmoan civilians, and to the racist perceptions that Americans had of them at that time. The impacts have been deep and lasting.

In 1899, when the United States was aggressively conquering the native lands of foreign people to extend U.S. influence, the U.S. Navy received orders to attack Sāmoa in an effort to install a ruler favorable to the United States. The USS Philadelphia shelled Sāmoan villages, targeting and killing civilian populations, including women and children. An eyewitness to one of these bombardments reported “shells bursting everywhere; the cries of the bedridden and the helplessly wounded burning alive in their blazing houses ... mangled children crawling on the sands.” Ensign John R. Monaghan, who hailed from the Spokane area, was among the U.S. officers and sailors who went ashore to burn villages – a fact that is overshadowed by the statue’s depiction of him as a martyr and a hero.

The Monaghan statue and its pediment are problematic for three important reasons. First, they commemorate a war that was not honorable, and that caused pain and destruction of Sāmoan communities. Second, the bas-relief pediment on the statue uses degrading language, perpetuates racist stereotypes, and misrepresents Sāmoan defenders of their land, homes, and resources. Lastly, they serve as a constant reminder of a painful past and thus continue to inflict harm and cause pain to the Sāmoan and the larger Native Hawaiian and Pacific Islander communities of Spokane, which includes the second largest Marshallese population in the nation. As Spokane media in the past few years demonstrates, this monument continues to serve to this day as a rallying point for anti-Sāmoan racism.

Perhaps the statue was a source of pride for Spokane citizens when it was erected in 1906, a physical reminder of the U.S.’s superiority over “the savage horde,” as Governor Mead referred to Sāmoans during the dedication ceremony. But the racist and ignorant perceptions that went virtually unquestioned during that era should not be allowed to represent Spokane today, 115 years later. We must not continue to pay homage to unjust wars, people who carry them out, and racist, colonial beliefs that lead to them.

In solidarity with our Native Hawaiian and Pacific Islander community members, we call for the immediate removal of the statue and the pediment, and we ask, with deep humility, for the full support of the Spokane City Council in these efforts as we move closer toward reconciliation and healing together.

The dedication of the Monaghan Statue in 1906 was tinged with anti-Sāmoan racism and white supremacy, and the statue has served as a rallying point and a justification for these attitudes ever since. This monument - like the war it memorializes - is unjust. The monument represents an injustice in that it attempts to honor Monaghan using a distorted and false depiction of both the war and an entire people. For Spokanites unfamiliar with our Pacific Islander community, the monument represents an injustice in that it perpetuates a single, erroneous story about Sāmoans and Sāmoan-Americans as a savage foe and robs both them and us of our humanity. For Spokanites and the many U.S. veterans whose roots are in the Pacific, the monument represents an injustice by inflicting ongoing pain and offense in its misrepresentation of their ancestors and the devastating impact of that war on their community. That pain and offense extends beyond our local community to Pacific Islanders throughout the U.S. and overseas, for whom Spokane, Washington, is known as the place with the offensive Monaghan Statue. The widespread reputation of this monument is a humiliation to our Spokane community and it must be removed.

We will send the petition to the Spokane City Council.