To: The United States Senate

Senators: No vote on the NDAA until we build back better! 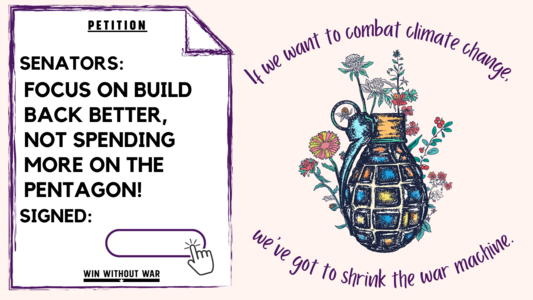 To members of the U.S. Senate:

With precious time running out to enact the Build Back Better agenda, I urge you to refuse to vote for the $778 billion National Defense Authorization Act until BBB is passed. Moreover, when you do vote on the NDAA, I urge you to vote to cut the Pentagon budget. We should focus our resources on our communities, not the war machine.

While the Biden administration has promised to take bold steps to reduce the United States’ carbon footprint and invest in clean energy, there’s one BIG piece of the puzzle that’s always missing from the conversation — the Pentagon.

Here’s the thing: the Pentagon is one of the world’s BIGGEST polluters, churning out more greenhouse gas emissions than 140 countries combined. It’s only gotten worse since the start of the “War on Terror” — military activities in Afghanistan, Iraq, Pakistan, and Syria alone weigh in at over 400 MILLION metric tons of CO2.

If we truly want to combat climate change we’ve got to shrink the U.S. war machine. But while infrastructure funding and a Build Back Better agenda that would invest in clean energy sit on the chopping block, a few powerful Senators are ready to ram through an astronomical $778 BILLION budget to fund *more* weapons and war.

We need your help to make sure ALL our Senators hear our call: Focus on Build Back Better, not spending more on the Pentagon!