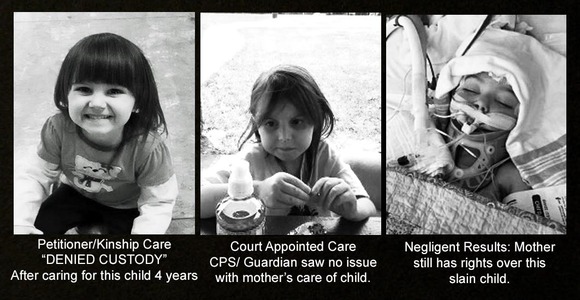 In similarity to the “2011 Forfeiture Rule & Law of Succession” enacted in the United Kingdom based on the case of Scotching Vs. Birch.

Any child who is slain by a custodial party & or that party played an active role in said child’s death, will automatically lose their custodial rights in part to all decisions regarding how the child’s remains will be buried & or cremated at the time of death if they are:

* Under suspicion/investigation by Local Authorities/CPS/Mandated Reporters.
* On a safety plan or under the supervision of local Child Protection Services.
* Had previous allegations of abuse via CPS/Local Authorities/Mandated Reporters.
*Admitted to their role in said child’s death.
* Is charged & or convicted in part of said child’s death.
* Had been incarcerated for child abuse-related convictions.

Once the custodial right is removed, the next of kin not residing at said custodian’s residence will then have all rights over that child’s remains whereas the party under suspicion will be denied all communication and access.

If multiple parties fall as next of kin equally, if disputed, can individually file a petition to probate court for custodial rights within a maximum of 72 hours post-mortem after which they forfeit their rights to custodianship and an objection to another party’s petition.

A Probate Court would concede and hear the petition expeditiously. No later than one business day after the petition is filed. This would be actionable much like Juvenile Court removing a child from a custodial party on an emergency basis without the delay of notification to said custodian. This method under an urgent basis has functioned successfully for decades within the Juvenile Court System and Child Protection Services.

If a relative cannot be located for custodianship, the State will adhere to the burial of said child’s remains with aid through Victim’s Services.

All Coroner Offices shall be notified by local authorities to hold all children’s remains who fall under the suspicion of homicide until a new custodian is appointed and or cause of death is determined.

Ohio vs. Britney Mayes. Mayes received custodianship of Averylee D. Hobbs through the Hamilton County Juvenile Court system after years of battle for her custody. Mayes spent 6 years under a cloud of suspicion for her role in the abuse of Averylee & her sibling. In 2011, Mayes had been convicted of assaulting Averylee and served a 6-month sentence in an Ohio Prison when Averylee was 3.5 wks. old for a skull, tibia, & ulna fracture in & around a bathtub. In 2010 Mayes was under suspicion of the strangulation of Averylee’s eldest sibling where local courts decided that Mayes was a danger to her minor child & forbid her custody prior to the ruling in Averylee’s case.

On July 29th, 2016, during a 72-hour period between Averylee’s fatal traumatic brain injury in & around a bathtub until her time of death, local authorities and CPS were conducting investigations against Mayes and her spouse in connection to the then assumed homicide. Mayes at the time of death had five CPS cases active, one under investigation, and two confirmed where Averylee was removed from Mayes’s care. The first custodial removal was from 3.5 weeks old to almost 4 years old. Three months post-reunification Averylee was removed for an additional extended period due to injuries mirroring those brought forth during the custody trial. CPS was involved at all times on a safety plan prior to & post-reunification to Mayes. Along with the supervision of a Hamilton County Guardian & child welfare therapist. These parties were active in Mayes & Averylee’s entire life and witnessed the abuse (Mental, Physical, & Sexual) but decided to disallow the Juvenile Magistrate the information required to spare Averylee’s life. All confirmed to the Magistrate & Appeals Judge that there were no concerns in Averylee’s welfare in the care of her mother, Britney Roll Mayes. All were instructed to inform the custodial petitioners on a court-mediated agreement if placement changed. All decided against the agreement & misled the petitioners. The results of that action were grim.

During the 2016 autopsy of Averylee, it was proven that there were years of abuse and her body showed a distinct timeline pattern of continual physical, torturous, & sexual abuse. Also, in 2016, The Hamilton County Homicide Unit confirmed that the only possible perpetrator was Britney Roll Mayes. Averylee’s court-appointed custodian was convicted in 2020 when she pled guilty to Aggravated Murder to avoid the death penalty.

No family should have to fight non-petitioning family members to bury a murdered child. No custodian should have legal authority over a child’s remains that they murdered or played an active role in, either alleged or confirmed. Nor, should any party have to endure the mental anguish in waiting to lay that child to rest.

No child should become unrecognizable because parental rights dictate, they must.

If a custodian kills, all parental rights bestowed to them should be legally & immediately forfeited.

It should be a child victim's right to be buried with dignity and peace from their murderer.