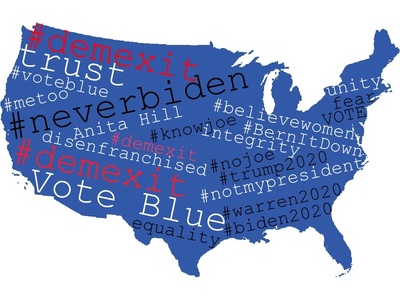 Do not choose as our nominee a candidate with multiple allegations of inappropriate behavior and sexual assault. Either give the nomination to the candidate with the next highest delegate count or find us an entirely new option.

Americans still want to believe in the power and beauty of democracy in our United States. We value the citizens, voters and voices in our communities. We respect and value women, we believe women. So while we also believe that a person is innocent until proven guilty, we cannot in good conscience vote for a candidate who has looming sexual assault allegations.

All voters deserve a candidate who is free from such controversies and the DNC needs to take the accusations against Mr. Biden as seriously as its voters do. It is unconscionable that the Democratic Party would support a candidate with so many potential skeletons in his closet, especially in our post-MeToo culture. By supporting Biden as the nominee, the DNC would effectively be saying they don’t believe women.

By moving forward with Biden as the nominee, the DNC would also be alienating voters who demand a candidate be not only a smart choice but an ethical one. We need a candidate we can vote for without becoming a party of hypocrites (only outraged when the accused isn't one of our own). If the DNC provides no alternative to Biden as the presidential nominee, they will be degrading their own integrity. The result will be disillusioned voters and fewer people voting for the Democratic candidate in November.

We won’t simply “vote blue no matter who” because we will NOT be manipulated by fear of another Trump presidency. The danger of losing our own integrity and of losing strength in the Democratic Party (making way for future Trumps to be elected) is far greater. We won’t “vote blue no matter who” when we haven’t been given a candidate who deserves of our votes. We will vote our conscience for a candidate who represents the honesty and respectability that we want our country’s name to evoke. We will not settle for less.

The DNC must not make Joe Biden our nominee. There are alternatives. Please show us that we can still be proud to vote blue, and that the Democratic Party is still a party with integrity. There’s no limit to what we can do with a united party, but we may not be able win in November if we don’t get everyone on board with a candidate we can trust! We know our voices matter: if you want to count on our votes, first be a party we can count on.

With the most recent news on the allegations against Biden it’s more important than ever that we are offered a different nominee! Biden now has the rape allegation working against him in addition to rumors of mental decline and people generally distrusting him. It doesn’t help that he’s associating with the likes of Larry Summers. He can’t beat Trump if he’s not willing to address these issues head-on; at the very least he needs to distance himself from questionable advisors/associates, offer concrete solutions to progressives’ policy concerns and give us some reason to believe he can be trusted. Don’t give up — send the message that he doesn’t get our votes just because he’s “not Trump”.

Just so everyone knows: MoveOn starts the signature goal low (to improve morale or some such) but as we get closer to the CURRENT top goal, a new goal will be set. So the goal is to get as many signatures as possible, not just whatever the current upper limit is. Keep sharing the link!