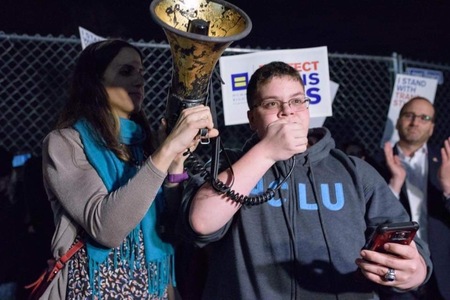 Governor Youngkin is attacking vulnerable children in order to wage a culture war based on hate, discrimination and the policing of trans and gender expansive young people for the "crime" of being who they are. A new directive from his administration would create new policies that directly attack and undermine any progress made to protect trans students. The new policy would require schools to categorize transgender children by their “biological sex” when it comes to using the bathroom, locker room and other facilities and participating in activities. They also bar students from using their correct name or pronouns without outing them to potentially hostile parents or guardians.

The GOP will stop at nothing to actively terrorize marginalized communities like the queer community and queer students. It is no mystery that the GOP will continue these vitriolic and baseless attacks against our most vulnerable communities; they have proven this to us throughout their history and they are still openly committed to that legacy. We are currently seeing the direct results of what can happen with low voter turnout. The GOP will not govern effectively, they will prioritize violent roll backs of any progress that we have made thus far to protect marginalized communities and they will build their platforms around doing so.

If this makes you angry, turn your anger to action. A few districts have already spoken out against the ruling, but we need more. We need widespread outrage at this new proposed legislation to prevent it from going through. We need to take our anger, our fear, our passion and our love for one another and show the GOP that Virginia is for lovers, and beyond Virginia, our community will not be intimidated, oppressed or legislated out of the society we all live in. In a Youngkin state, we have to fight for one another because he has made it clear that he will not fight for the rights of all Virginians– only those that he and his party deem deserving of basic liberties and fundamental human rights.

There is a 30 day comment period for public comments on this pivotal issue that begins on September 26 and ends on October 26. You don’t need to be from Virginia to speak out and support trans lives. You can submit public comments here: https://townhall.virginia.gov/L/Comments.cfm?GdocForumID=1953