To: President of the United States

A Child's Inalienable Right to Safety 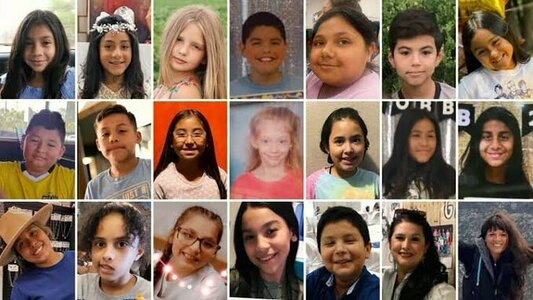 We respectfully ask your legal advisors to review the attached petition and its enabling Argument. We believe this proposal is a viable constitutional process to enumerate an American "Child's Right to Safety." We further believe the proposed use of the Census Bureau's American Community Survey is a constitutionally-sound alternative to nullify and constrain the Supreme Court's misguided and absolute Second Amendment rulings on the "Right to Have and Bear Arms".

Every nation EXCEPT the United States has ratified the United Nations Convention on the Rights of the Child (UNCRC). It enumerates that s child's rights include being safeguarded against all forms of abuse, neglect, and exploitation. While our country has not signed the Convention, they have an unenumerated inalienable right to not be killed by murderers with assault rifles.

Yet SCOTUS enshrined the Right of an 18-year-year-old, the day after they are a legally a child, to freely purchase and arm themselves with an AR-15 semi-automatic military assault weapon along with unlimited amounts of ammunition. They can roam free to mass murder defenseless innocents younger than them. Over and over again, in spite of our blistering outrage and bottomless despair, fanatical lone wolves stalk, ambush, and assassinate our children.

There's an old saying in the law, "Your right to swing your fist ends where my nose begins." This adage declares that Rights have boundaries, even inalienable ones. Rights can, and often do, conflict with one another. When they do, prioritized choices must be made. At the end of the day, the best choice is the one that provides the most benefit and the least harm.

In our constitutional republic, the rights must generally be enumerated in the Constitution, and the power to legislate, enforce, and adjudicate is delegated to the representative government in the interests of "We the People."

The 9th Amendment states that unenumerated individual inalienable rights exist outside the Constitution. Some are long-standing, others emergent. "We the People" have retained inherent powers and rights, just like POTUS and Congress, to enumerate and exercise.

Our Founders were enlightened and realistic men. They understood that one day the government they created could become ruled by a dictatorial minority, abusive, or detached from those it serves. So, they ensured we had another way. It's in the language of the 9th Amendment. It enables us to directly exercise our retained extra-constitutional power to enumerate a Right ourselves. If a majority of us credibly, and legally, articulate and declare that our children have a Right to Safety, then it becomes a Constitutionally-protected Right. If, and when it does, then it is subject to Constitutional jurisdiction and powers.

One way to enumerate a retained right is through our elected representatives in 1) state legislatures and 2) Congress. Another way is through the Supreme Court recognizing the right and exercising judicial powers to protect it. Unfortunately, polls routinely report that legislative representatives, through gerrymandering and by catering to special interests, consistently ignore the Will of the majority of the American People. Our Congress is unable to protect a child's right to safety because of a doggedly recalcitrant minority.

Thankfully, our Constitution provides another path. The Founders of our fledgling nation had a bold and ambitious plan to empower the people over their new government. The plan was to count every person living in the newly created United States of America and to use that count to determine representation in Congress. As early as 1870, the Supreme Court characterized as unquestionable the power of Congress to require both an enumeration and the collection of statistics in the census.

In executing its powers to collect vital information, the Census Bureau conducts scores of surveys. They are about population, income, commerce, etc., and are used to allocate funding, and provide decision-making data to Federal, state, and local legislators, businesses, unions, appropriators, etc. The reliability and validity of these surveys have been tested over time and can be trusted. One of these surveys is the American Community Survey (ACS). The ACS is an ongoing Census survey. It provides vital information yearly about our nation and its people. The questions are approved in a well-established protocol. We the People can utilize the ACS to directly express, delineate, and constitutionally enumerate retained rights. The Census Bureau can count and report whether or not a majority of us want a retained right enumerated. Moreover, the Census Bureau has the funding, staffing, and expertise to quickly implement such a census if and when directed by the President. If we use the Census Bureau, we are constitutionally able to directly express our Will to enumerate any and all of our retained Rights just as the 9th Amendment envisions.

At that point, the "Right to Bear Arms" and a "Child's Right to Safety" become the swinging fist and vulnerable nose. Congress and SCOTUS would be compelled to exercise their Constitutional roles and powers to protect a "Child's Right to Safety" by balancing, prioritizing, and optimizing it by setting new constitutional limits on the scope, access, and the exercise of the Right to Bear Arms.

Whether it is a child's right to safety, or a woman's right to choose, or same-sex marriage, or contraception, or travel, or exercising any of our other retained rights, it is "We the People" who possess the power and have the census as the means to enumerate any and all of our inalienable rights.

It is "We the People" who are ourselves the masters of our fate and the captains of our souls.

The petition will be mailed to the President at the White House, 1600 Pennsylvania Avenue NW, Washington, DC 20500