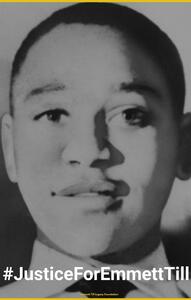 To bring truth, justice and long overdue closure to this historic case, the Emmett Till Legacy Foundation (ETLF), its supporters and family members of Emmett Till are demanding that:

1. Mississippi Attorney General Lynn Fitch and W. Dewayne Richardson ​District Attorney for the Fourth Circuit Court District of Mississippi, request that the Mississippi Law enforcement, and the Sheriff of Leflore County immediately, serve the warrant on Carolyn Bryant Donham, wherever she may be found.

2. Reactivate the case regarding the death of Emmett Louis Till.

3. Conduct a more transparent and extensive investigation, including impaneling a new Grand Jury to specifically address the culpability and actions of Carolyn Bryant Donham in the kidnapping that led to the lynching and murder of Emmett Louis Till.

5. An official apology to the Till Family from the Federal Government, Department of Justice, the State of Mississippi and local law enforcement for the human rights violation, wrongful death, kidnapping and lynching of Emmett Louis Till, and for the miscarriage and obstruction of justice in the 1955 trial.

Emmett Till was murdered 67 years ago. At only 14 years old, he was kidnapped, brutally tortured, lynched and killed during a racially-motivated hate crime that ultimately helped launch the modern day civil rights movement.

The past is not past​. The specter of this devastating crime remains ever-present through modern day racially motivated murders. The burdens borne by families such as Emmett's (Thelma Wright Edwards and Deborah Watts), George Floyd’s (Philonise and LaTonya Floyd) Ahmaud Arbery’s (Wanda Cooper Jones and Marcus Arbery Sr.), Trayvon Martin’s (Sybrina Fulton and Tracy Martin), Jordan Davis’ (Lucy McBath and Ron Davis), Eric Garner’s (Gwen Carr), Breonna Taylor’s (Tamika Palmer) and many others force them to speak up loudly, demand justice and take action when others won’t.

Family members of Emmett Till urgently need your help​. ​Emmett’s case remains open and active​, appearing on the Department of Justice Unsolved Civil Rights Crimes cold case list. The case was reactivated in 2017 when the ​only known accomplice, Carolyn Bryant Donham - who is still alive and now well into her 80s ​- appeared to admit to an author of a book about Emmett Till and his case, that she lied to her husband, and during Emmett’s murder trial, by falsely claiming that Emmett made sexual advances and physically touched her. Carolyn Bryant Donham’s false claim and involvement are the actions that began the tragic chain of events leading to Emmett’s murder.

Thank you for your support to help bring truth, justice and closure to the
Emmett Till murder case.

Stage a Press Conference
Deliver them in person
Email the signatures

Deborah Watts, Emmett Till's cousin, co-founder of the Emmett Till Legacy Foundation (ETLF) and one of the justice seeking family members released the following statement after a grand jury in Mississippi failed to charge Mrs. Carolyn Bryant Donham for her role in the 1955 kidnapping and lynching of Emmett Louis Till.

[Statement Continued]
“The state of Mississippi has once again turned its back on Emmett Till, Mamie Till Mobley, me and my family.

This gut wrenching and disappointing outcome certainly feels preordained given the sequence of events that have taken place. After indicating in March 2022, that there was nothing further that could be or would be done in the unsolved and unresolved case. After also deferring to the Department of Justice December 6, 2021 report and investigation while never assuring us that they would pursue this case without additional evidence, unwilling to conduct its own independent state investigation or do anything further in the fight for justice for my dear cousin, Emmett.

[Statement Continued]
This is a missed opportunity to break the cycle of protection that has been afforded to white women, specifically to Carolyn Holloway Bryant Donham, Mrs. Roy Bryant, the last living known accomplice, who has been allowed to escape full accountability and judicial judgement in this case. No family should ever have to endure this pain and injustice for this long.

As a promise to our beloved cousin, an American Hero, Mamie Till Mobley, we must not stop seeking justice and accountability for her son. And with respect and dignity, not just with words but with action, without hatred, malice or vengeance…We vow that the pursuit of accountability and Justice For Emmett Till will continue".

On Tuesday, June, 21, the outstanding physical warrant charging Carolyn Bryant Donham with kidnaping was discovered in the LeFlore County Courthouse in Greenwood, MS. The warrant, discovered by our small search team, was never executed for Mrs. Roy Bryant in 1955.
Family members of Emmett Till has sent Certified copies of the warrant to local and federal law enforcement agencies.
Please continue to contact:
District Attorney for the Fourth Circuit Court District of Mississippi, W. Dewayne Richardson. email- [email protected]
phone- 662.378.2105 Ask him to: conduct a proper investigation, execute the outstanding physical warrant, move the case forward with appropriate charges and an indictment of any known accomplice and impanel a grand jury. This new evidence further proves Carolyn Bryant Donham's culpability.
We appreciate your ongoing support!
#JusticeForEmmettTill

THANK YOU for your overwhelming support!! We now have over 200,000 #JusticeForEmmettTill Petition Signatures!! Please continue to share this important Petition!
The fight for Justice is not over! Time is running out! Carolyn Bryant Donham must be held accountable for her role in Emmett Till's kidnapping and murder.
We are asking everyone to email and call the Mississippi Fourth Circuit Court District Attorney
W. Dewayne Richardson
email- [email protected]
phone- 662.378.2105 Ask him to Demand #JusticeForEmmettTill
Emmett's case is still an unsolved case. We will continue to pursue all legal avenues to bring any living accomplice to justice. We will also make sure to set the record straight about Emmett's character, his death will not be in vain.

If we can get Justice and make it right for Emmett, America can begin to heal.

We are now close to 40,000 signatures!
Thank you ALL for standing with us!
We are not seeking vengeance, but as a promise to Mamie Till Mobley, we will continue the fight for #JusticeForEmmettTill! His death will not be in vain. Carolyn Bryant Donham needs to be held accountable.
We deserve Truth, Accountability and Justice!!
After signing the petition, please share it also!
Thank you!!!!

Great News!! We hit a milestone with over 20,000 Signatures!!!!!
THANK YOU!!! You signed, posted, shared and are still believing that
#JusticeForEmmettTill must prevail! We are grateful for all of you!
Stay tuned for next steps!
#EmmettTill #hisdeathwillnotbeinvain #spiritofemmetttill #spiritofmamietillmobley
#legacykeepers #familiesofthemovement

Thank you for joining your voice with Family Members of Emmett Till and our supporters, by signing the #JusticeForEmmettTill Petition. We must right the wrongs of the past!
After signing the petition, please consider making a donation today to help advocate and support the Victims of Racially Motivated Violence and Murder Act (VRMMA), legislation that empowers, heals and repairs the lives of the families of civil rights era killings and those still occurring today. The Foundation also works to preserve and honor the memory and legacy of Emmett Till and his mother Mamie Till Mobley, by educating communities about Emmett and the era of hatred, terror and violence that stole the lives of so many.
Click here: https://emmetttilllegacyfoundation.com/ to donate and support the important work of the ETLF.

Thank You—Now Take the Next Step!

Family members of Emmett Till continue the fight for justice not only for Emmett, but also for families of those who are victims of racially motivated murders, through the work of the Emmett Till Legacy Foundation. The Foundation depends on contributions from supporters like you.

After signing the Petition please make a donation today to help advocate and support the Victims of Racially Motivated Violence and Murder Act (VRMMA), legislation that empowers, heals and repairs the lives of the families of civil rights era killings and those still occurring today. The Foundation also works to preserve and honor the memory and legacy of Emmett Till and his mother Mamie Till Mobley, by educating communities about Emmett and the era of hatred, terror and violence that stole the lives of so many.

Click here https://bit.ly/3fNS6Fz to donate and support the important work of the ETLF.