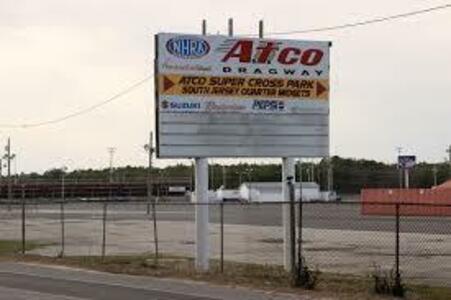 The owner of Atco Raceway, Leonard Capone, allowed a "material change" in the applicant's (IAA - the purchaser) plan for the property in that they will perform "substantial and critical changes to the overall site plan" where over 6,000 vehicles in various stages of damage or disrepair would be stored. This modification, as cited in The Pine Barrens Tribune is "a proposed change from a paved surface on which auction cars would be stored to one consisting of 'crushed stone' (otherwise known as gravel) in order to comply with the township's 'conditional use standards' for such a facility."

Some people would like to preserve Atco Raceway as a treasured landmark. To those people, I would say that it is a nostalgic idea for preserving a place that generations have enjoyed.

To all people who get their drinking water from wells in the surrounding area, whether Atco Raceway is preserved as a landmark or not, we cannot and should not allow the asphalt to be pulled up and replaced with gravel. As reported in The Pine Barrens Tribune by Mr. Thomas J. Stalba, Jr., of Hammonton, NJ, "Now they (IAA) are trying to convince the board and the community that they are a 'used car establishment' that should be able to tear up paving and put 6,000 recently wrecked cars, and the fluids remaining in them, on a bed of gravel with a water table that is as little as 1.7 feet below the surface of the ground on top of the Kirkwood-Cohansey aquifer, right next to the Mullica River watershed, in the heart of the Pine Barrents."

Carl Miller, as quoted in The Pine Barrens Tribune, who said he has participated in drag racing since the late 1960s, "called allowing cars in disrepair to be parked on gravel 'a terrible idea' that would allow chemicals to seep directly into groundwater with little possibility of containment." Car liquids, such as gasoline, antifreeze, brake fluid, and even oil do not have the chance to pool under a vehicle if there is gravel underneath.

Do the residents of Atco, NJ know that they are responsible for their clean drinking water? Visit these two state sites:

IAA states that they have millions of dollars in insurance should well water become contaminated. How would the homeowner know if his well water was contaminated? He would have to use a NJ state certified testing center that would cost thousands of dollars. Then do a second test just to be sure that the chemicals we are drinking now are "within allowable limits." Then it is our responsibility to make every effort to fix our own wells. The cost to do this would be thousands and thousands of dollars each year for each homeowner.

When I moved to Atco almost 30 years ago, we were presented with giant carbon tanks placed inside the laundry room by the State of NJ. We were told that the blueberry field at the end of the road had sprayed pesticides on the plants and the pesticides made their way into the water table in "amounts that exceeded what was allowable." You see, we are still drinking water with contaminants already. We just cannot afford to test our well water annually, as the State of NJ recommends. Why then are we allowing the very obvious poisoning of our water table to occur?

If you believe this is an injustice, if you want to keep your loved ones safe, if you want to stop what is so obviously wrong from occurring, you will sign this petition to stop this from happening immediately. Then tell your neighbors to sign as well. We all deserve clean drinking water. We certainly pay enough in our taxes for this "privilege."

Thank you for listening.