Restore the Integrity of Our Skyline, Remove the Trump Sign 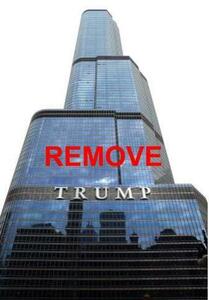 After the events of January 6th, 2021, the Trump brand has become a symbol of violence, racism, insurrection, and sedition. His name is in full display in our downtown, and it is tarnishing our beautiful and celebrated skyline. It is an immoral eyesore and an insult to the diversity and pride of our people in this city. Mr. Trump does not deserve to have his name on display anywhere in our country, and certainly not on the second tallest skyscraper in Chicago. The Trump sign must be removed NOW!

The assault on January 6th, 2021 to our Nation's congress and our Capitol Building was an aberration, and a direct threat to our democracy. This violent attack was instigated by Mr. Trump and Mr. Trump Jr.. The rioters attempted to destroy the institutions that make us the strongest democracy in the world.
These rioters displayed Neo-nazi, racist, and fascist symbols. As more footage of the incident is brought to light, we all are witnessing the violent nature of the groups that forced themselves into The People's House.
A police officer was murdered and four other people died in this violent event. It is one of the darkest days in the history of our country.
We must make sure that his name is not glorified in any way, because if we do not act we will have normalized the behavior Mr. Trump and his rioting mob of followers displayed. We Chicagoans and Americans ask you to do what is in your power to remove the sign that is now a stain to a city we are proud to call home.